Russian-born painter Nicolai Fechin was the son of a woodcarver. Fechin’s early youth was marked by a serious childhood illness, from which he was said to have recovered thanks to the touch of a Russian icon. At age 13, his father enrolled young Nicolai in art school and by 19, he was studying at St. Petersburg’s Imperial Academy of Art. While there, he studied with artist Ilya Repin, who facilitated an awareness between contemporary Russian and western schools of art. After graduating, Fechin received a travel scholarship and roamed throughout Europe, where he rapidly became noted for a signature palette-knife technique. When the upheaval of the Bolshevik Revolution followed on the heels of WW I, Fechin moved to New York, where his portraits of celebrities brought him immediate success and won him the Thomas R. Proctor prize for portraiture from the National Academy.

In 1927, Fechin settled in Taos, NM, where he produced not only a steady stream of portraits of southwestern subjects but also created a beautiful home with wood embellishments carved using techniques he had learned from his father. The artist’s home is now the Taos Museum at Fechin House, and seeing his carvings amplifies an appreciation of his artistic skill. Fechin continued to travel extensively, especially in the Far East, ultimately settling in southern California, where he returned to the work of painting society portraits.

We buy works by Nicolai Fechin 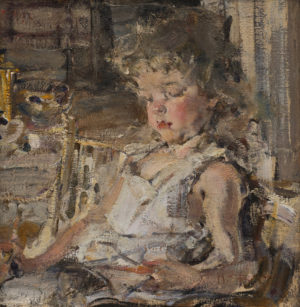 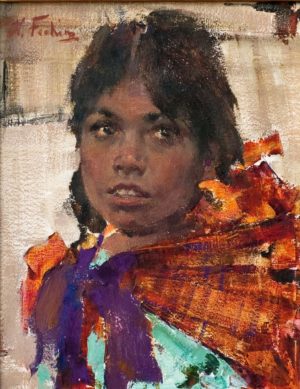