Known for the intensity of his brushstrokes and his use of bold colors, Marsden Hartley was born in Lewiston, Maine, in 1877. He obtained an expansive art education at several institutions, including the Cleveland Institute of Art and the Art Students League in New York. The Secessionist photographer Alfred Stieglitz, a close friend, admired Hartley’s work and facilitated Hartley’s first one-man exhibition at his 291 Gallery in New York City. This permitted the artist to travel to Europe and study avant-garde art.

Hartley was constantly travelling, including to Aix-en-Provence, France, where his work was heavily influenced by Cezanne. Between the years 1933 and 1934 he lived in Bavaria, Germany, where he incorporated military insignia and the German national flag into his work, using passionate colors and sharp outlines. In Germany he had several exhibits, including one with the Der Blaue Reiter group at the 1913 Herbstsalon. Additionally, he took part in the Armory Show held in New York, also in 1913.

In 1916 he returned to the United States, where his style became more figurative and mystical. During this time he took trips to New Mexico and Bermuda, where he produced landscape paintings influenced by Cubism and notable for bold, expressive brushstrokes and colors. Significantly, Hartley was also granted a Guggenheim Fellowship in 1932. 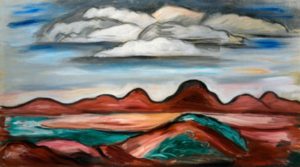 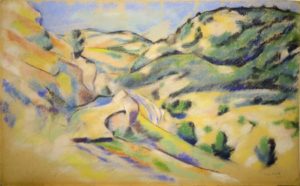