Born in Oakland, California, Marjorie Eaton enjoyed a unique artistic career. Educated at the California School of Fine Arts, she subsequently studied in Italy and France. Moving to New York, Eaton studied with Hans Hoffmann at the Art Students League and shared a studio with sculptor Louise Nevelson. The two lived downstairs from Diego Rivera and Frida Kahlo, artists whom Eaton greatly admired and who became close friends.

Seeking inspiration, Eaton traveled west, eventually becoming one of the few female artists to join the burgeoning Taos artists’ colony. Eaton was drawn to the striking appearance of the New Mexico landscape and its people, and her paintings recorded Pueblo life in bold, colorful, modernist compositions. While there, she befriended many artistic Taos notables, including Victor Hiiggins, Walter Ufer, Mabel Dodge Luhan, and D.H. Lawrence.

Making a living as an artist was difficult, however, and Eaton moved back to California, where she began an acting career that ultimately spanned forty years. Much of her artistic legacy, however, rests in the paintings she created in Taos, which skillfully show the deep affection for and understanding of Native people, their daily lives and the landscapes in which they made their homes. 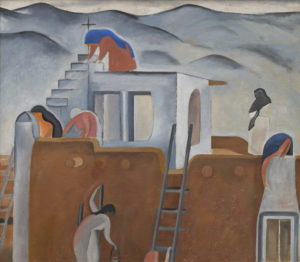