LaVerne Nelson Black’s interest in painting Native American subjects developed throughout his childhood in the Kickapoo River Valley area of Wisconsin, a region rich with the influence of Native American culture. After his family moved to Chicago, Black was able to study at the Chicago Academy of Fine Arts from 1906 to 1908. He worked in Chicago and New York City, but due to failing health, Black moved with his family to Taos around 1925. It was there that he did his best work in the midst of a thriving colony of artists as well as an active Native American pueblo community. He developed a distinctive style, presenting traditional subject matter in bold, vivid strokes of color. After several years in Taos, Black moved to Phoenix, Arizona, for health reasons. In addition to commissions from the Santa Fe Railway, he was also commissioned for many public works of art during the WPA period. Black died prematurely in Phoenix at the age of fifty-one. 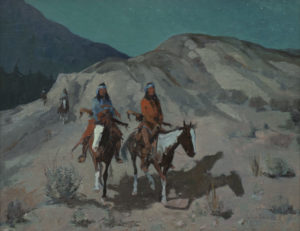 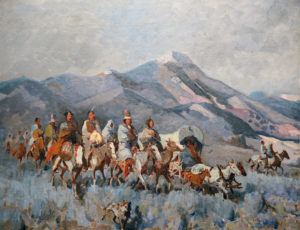 A Band of Indians