Julian Scott was a unique artist who gained fame at an early age for his Civil War scenes. Later, he turned to portrayals of Native American subjects.

A Civil War volunteer at 15, Scott received the Congressional Medal of Honor for battlefield bravery. At 17, he went to New York to pursue art studies. He was accepted into the National Academy of Design, and received additional private training under several prominent artists. After his debut submission to the National Academy’s 1870 spring exhibition, he was granted associate membership. Soon, his work was in demand.

In 1890, Scott was one of five artists selected to go to the American West as a special agent for the U.S. Census. Charged with preparing illustrations and writing reports on various Native American communities, Scott made numerous visits among the Hopi and Navajo, in addition to the pueblos of Laguna and Zuñi, and Oklahoma and South Dakota Indian Territories. As completed, the 1890 census report contained numerous images, with Scott’s predominating — including eleven portraits. Scott particularly appreciated the Hopi, whom he continued to visit and portray.

Artwork by Julian Scott is held by many museums, including the Smithsonian American Art Museum, Indianapolis, Crystal Bridges Museum of American Art, and Harvard’s Peabody Museum. 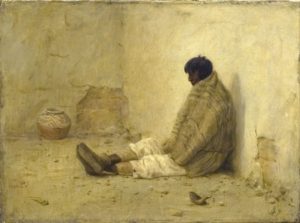