Jozef Bakos was born and raised in the Polish immigrant community of Buffalo, New York. Following the completion of his education at the Art School of the Albright Art Gallery, he traveled west with his friend and colleague, Walter Mruk. The two young artists eventually found their way to Santa Fe and by 1921 founded Los Cinco Pintores (Spanish for Five Painters), the first artist group in New Mexico devoted to ideas of modernism. Jozef Bakos, who also became a member of the New Mexico Painters group, was a significant contributor to modernism in the American Southwest.

During his career, he achieved some national recognition when his works were accepted for important exhibitions and, particularly in the mid-1930s, when the Whitney Museum of American Art purchased one of his paintings. Jozef Bakos spent the majority of his long career painting in Santa Fe and from 1940 onward he shared his expertise as an art instructor at Santa Fe High School.

We buy works by Jozef Bakos 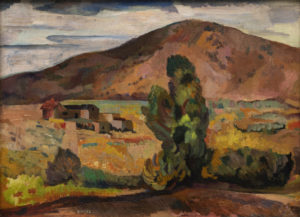