Born in Brooklyn, New York, Joseph Imhof began his artistic career as a self-taught lithographer for Currier and Ives in New York City. Married in 1897, he and his wife, Sarah, returned to Europe several times. In 1905, they visited the Southwest for the first time to record ceremonies of Pueblo Indians. Subsequently the artist became known as an important documentary painter of Native American life in New Mexico.

Imhof is best known for a series paintings called “Kivas and Corn,” which focused on the importance of corn in the culture of the Pueblo Indians. He built a studio in Albuquerque, in 1906, and traveled throughout the region, finally settling in Taos in 1929. Imhof collected many Indian artifacts and recorded ethnological information with his paintbrush. He had the first lithography press in Taos, making prints that are of ethnological value, and he also taught lithography. 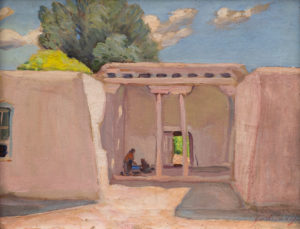 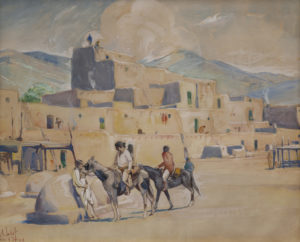