Joseph Horace Eaton, born in Salem, Massachusetts, was a West Point graduate and career U.S. Army officer, who had an unparalleled perspective on America, thank to a distinguished career that took him to the forefront of seminal nineteenth century events. Today, he is also recognized for work that ranks as the most rare examples of New Mexico art from that era.

In the 1840s, Eaton was part of the maneuvers involved in America’s westward expansion. During the Mexican-American War, he spent time as aide-de-camp to General Zachary Taylor, who was elected President in 1849, and followed this with a position as a presidential aide in the White House.

After Taylor’s untimely death, Eaton was stationed to the western frontier, serving in three different locations: Fort Defiance in Navajo country, Fort Thorn near Hatch, New Mexico, and near Albuquerque. During his four years in the territories, Eaton painted a series of watercolors that were the basis for engravings used to illustrate an 1857 book entitled “El Gringo: or New Mexico and her People.” Eaton’s paintings are highly sought by collectors and museums, and even the artist’s autograph is a valued auction item. 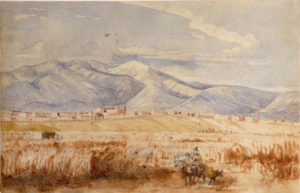 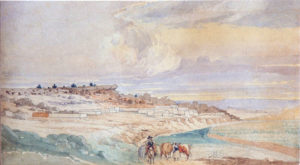