Born at Toll Cross, near Glasgow, Scotland, John Williamson immigrated to the United States as a child in 1831. He spent most of his life in Brooklyn but traveled extensively in New York and throughout New England. Williamson painted from the Hudson River to Lake George, depicting the Adirondack and Catskill Mountains. He also visited the Berkshire Mountains, Massachusetts; the Green Mountains, Vermont; the White Mountains, New Hampshire; and Connecticut. Williamson began exhibiting at the National Academy in 1850, and, in 1861, was elected an Associate Member. He also exhibited in Brooklyn, Washington, and Boston. In the early 1860s, he completed a few still lifes featuring lilacs, morning glories, cherries, and raspberries. In the late 19th century, he became particularly well known for his landscapes of the Hudson River Valley and Connecticut. He died in Glenwood-on-the-Hudson in 1885. 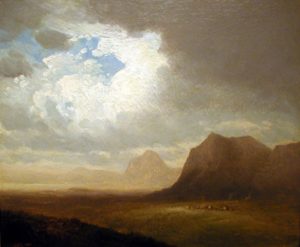