John Sloan was born in 1871 in Lock Haven, Pennsylvania. In 1875, his family moved to Philadelphia, where he spent the next thirty years. Sloan began his career as a newspaper illustrator for the “Philadelphia Inquirer.” Through Charles Grafly, Sloan soon met Robert Henri, who was then teaching at the Pennsylvania Academy of the Fine Arts. Sloan enrolled in a drawing class at the Academy taught by Thomas Anshutz, and eventually began renting Henri’s studio at 806 Walnut Street. This studio became a meeting place for other young newspaper illustrators, including William Glackens, George Luks, and Everett Shinn. These artists, along with Henri and Sloan, are now termed the “Philadelphia Five.”

By 1896-97, with the encouragement of Henri, Sloan began painting seriously, primarily portraits, in addition to his commercial work. Soon he began exhibiting his canvases. By 1904, following the lead of the rest of the Philadelphia Five, Sloan moved to New York City with his wife Dolly, whom he married in 1901. In 1908, Sloan was one of the participating artists in the landmark exhibition of the Eight at the Macbeth Gallery in New York. Although Sloan considered himself a professional artist, with his particular aptitude for drawing and printmaking, he continued to support himself as a commercial illustrator until 1916. (Sloan did not sell a painting until 1913). In 1919, he took his first trip to Santa Fe, New Mexico, at the urging of Henri, who had recently visited the town. In 1920, Sloan purchased a home in Santa Fe and, through 1950, spent four months of almost every year in the Southwest.

We buy works by John Sloan 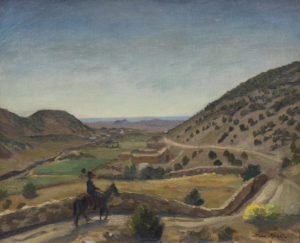 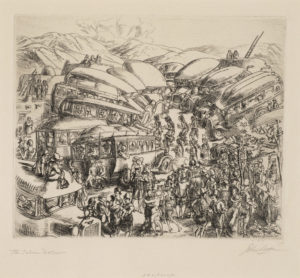 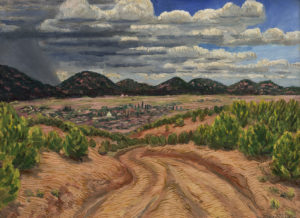 Santa Fe from the West 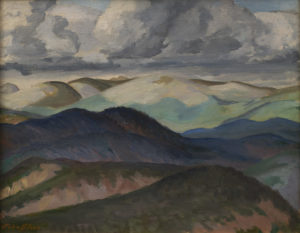 Sleet on the Sangre de Christos