James Everett Stuart was a prolific artist whose works were in great demand during his long career. Renowned as a landscape artist, he relished the commanding scenery of the American West. Stuart traveled extensively, depicting locations from Alaska to Mexico, as well as creating a large number of works in the western genre.

Born in Maine and raised in California, Stuart attended the San Francisco School of Design where landscape painting was a major pursuit at the time. Eventually, he set his sights on the Pacific Northwest. Attracted to the region’s pristine, verdant nature, for a short period he maintained his studio in Portland, Oregon. Subsequently, he undertook several painting excursions to Alaska and Yellowstone. Despite his attraction to remote areas, Stuart chose urban locations for his studio, first in Chicago, then New York City, and finally San Francisco.

Stuart’s works were exhibited at Chicago’s Art Institute and the Pennsylvania Academy of the Fine Arts. They are now held in many collections, including the White House, the Joslyn Museum, the Autry Museum of the American West, and Washington State History Museum. 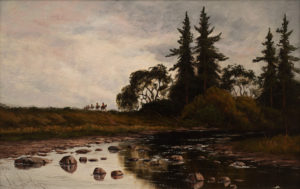