Joy Clinton Shepherd was born in Des Moines, Iowa in 1888, and attended the University of Missouri–Kansas City for a time before dropping out in 1906. With his brother, he traveled to the American Northwest where they lived with a Crow Indian tribe. Beginning in 1910, he studied at the Art Institute of Chicago, before joining the Illinois National Reserve to serve in the First World War.

After mustering out of the service, he moved to New York in 1919 and succeeded in finding work as an illustrator for a variety of magazines, including Collier’s and The Saturday Evening Post. His interest in the West led to employment as the cover artist for numerous Western-themed publications. In 1925, he expanded his career further by creating bronze sculptures in the style of Frederic Remington, one of the renowned artists of the American West.

In 1938, Shepherd moved to Florida and began teaching at Barry College. He served as Director of the Norton Gallery School of Art in Palm Beach in the early 1940s. He opened his own gallery there in 1947, becoming known for murals of iconic Florida locations like the Everglades. 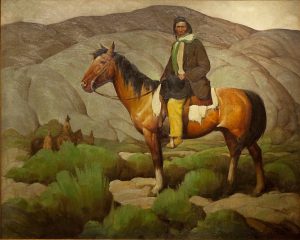