In 1897, Ila Mae McAfee was born in the small ranching community of Sargents in southwestern Colorado near Gunnison. She was raised on her family’s ranch and attended Logan County School, riding ten miles each way. After graduating from Gunnison High School in 1916, she spent time in Los Angeles at the West Lake School of Art and the Haz Art School (1917-1918). In Taos, she became known for her pueblo paintings, her depictions of horses and other animals, and her ranch scenes and landscapes. She worked as a WPA artist, completing many commissions for post offices in places such as Edmond, Oklahoma, and Clifton, Texas. In 1981, she was voted Taos Artist of the Year. In 1995, McAfee died in Pueblo, Colorado, where she moved after leaving her adobe home in Taos, New Mexico, in the late summer of 1993. 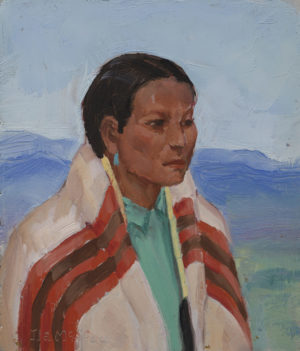 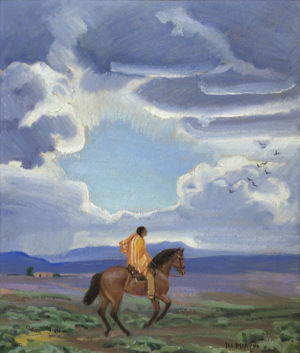