Born in Detroit, Michigan, in 1878, Hugo Pohl studied at the Detroit Museum of Art, at the Art Students League in New York City, and at the Acadamie Julian in Paris. Working for 18 months in Chicago painting murals for the International Harvester Company, he earned enough to buy a ranch in the Rockies and to tour the West. Around 1919, he spent two months in Southern California painting the missions. Pohl died in San Antonio, Texas, in 1960. He was the brother of artist Ernest Pohl. 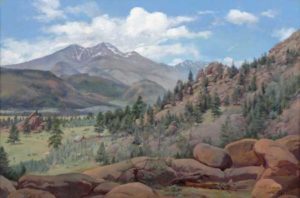