Herman Wendelborg Hansen was born in Germany in 1854 and displayed artistic talent early in life. Hansen began his formal training in Hamburg and continued his studies in England, where the inspiration of James Fenimore Cooper’s Leatherstocking Tales sparked Hansen’s lifelong interest in the American West.

Hansen immigrated to America in 1877 and worked in New York City as a commercial illustrator before heading west to study at the Art Institute of Chicago. In 1879, on receiving a commission to create a series of advertisements for Northwestern Railways, Hansen traveled throughout the West, visiting Montana, Texas, New Mexico, and Arizona. After settling in San Francisco at age 28, he continued his sketching trips in the Northern Plains and the Southwest. Over time, Hansen became known for Western-themed paintings featuring cowboys and horses in action, depicting life on the frontier with realistic details garnered through close observation.

While Hansen painted in oils, he is renowned for his skilled use of watercolors; late in life, he also created a series of etchings with tutelage from his artist son, Armin. Hansen’s work is in many private and public collections, including the California Historical Society. 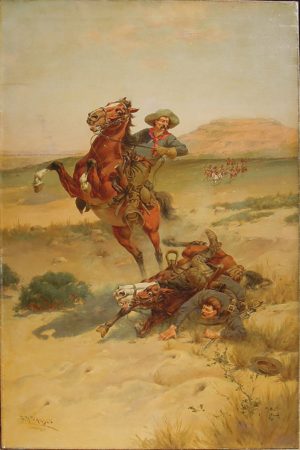