A native of France, Henry Farny emigrated to the U.S. in 1847 with his family at the age of 6, settling in central Pennsylvania. The family’s new home was near a Seneca settlement, which inspired Farny’s lifelong fascination with Native American cultures. In 1859, the family moved further west to Cincinnati, Ohio, where Farny began working as an illustrator for magazines and children’s books. In order to further his artistic abilities, he traveled to Düsseldorf, Germany to study under renowned landscape painter, Albert Bierstadt, before returning to Cincinnati, where he was one of the founding members of the Cincinnati Art Club. The Düsseldorf style of painting that he adopted was characterized by finely detailed brushwork, using a palette of relatively subdued and evenly placed colors and often contained allegorical stories set in a well-researched landscape.

Noticing that there was an appetite for paintings depicting Native American life, Farny traveled west, making repeated trips to sketch, to take photographs, and to collect artifacts, noting that “The plains, the buttes, the whole country and its people are fuller of material for the artist than any country in Europe.” His oeuvre included around a hundred paintings of Native American subjects in which his sympathies for what famed photographer Edward S. Curtis called the “vanishing race” were evident.

We buy works by Henry Farny 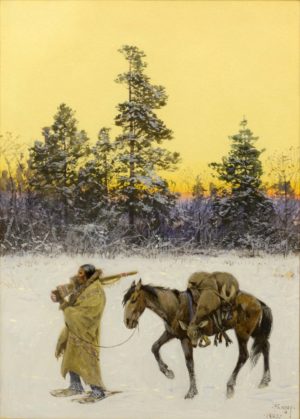