Following in the footsteps of her celebrated artist father Newell Convers (N.C.) Wyeth, Henriette Wyeth became one of America’s most influential portrait and still life painters. Although her paintings capture likeness, she also infused her own impression and mystery. Famous subjects include Helen Hayes and the First Lady Pat Nixon.

Wyeth was born in 1907 in Wilmington, Delaware, and at a young age suffered a crippling case of polio in her right hand. She studied at the Normal Art School in Boston and later at the Pennsylvania Academy of the Fine Arts. After she graduated, Wyeth returned to her family’s hometown of Chadds Ford, Pennsylvania and studied under her father. During this time she was married to the artist, Peter Hurd, and soon after relocated to San Patricio, New Mexico, where she began painting New Mexican-influenced content.

While in New Mexico, she and her husband became instrumental affiliates of the Roswell Museum. Wyeth exhibited in several shows around the country, including at the Metropolitan Museum of Art, in New York, and the Carnegie Institute, in Pittsburgh. Additionally she has permanent collections in several national museums such as the Chadds Ford Museum, in Chadds Ford, Pennsylvania, and the New Britain Museum of American Art, in Connecticut. 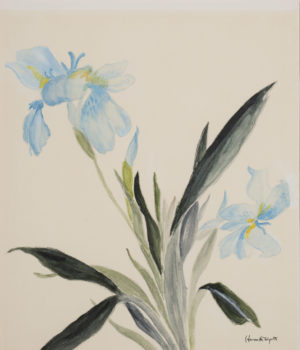