Born in Lyndon, Vermont, there is little known about Harvey Otis Young’s early life. But he studied at St. Johnsburg Academy in Vermont and worked as an ornamental painter and carriage decorator. In 1859, he moved to California to prospect gold and to pursue a painting career. He traveled on sketching excursions around California, Oregon, and Nevada, and used the Yosemite and Mount Shasta landscapes for artistic inspiration. The Hudson River School had an impact on his early work, and he began selling his art successfully.

The artist returned to the East in 1869. He settled in New York, and opened another studio. Young was known for his Western subject matter, so he continued to visit the West to paint and would return and sell his work in the city. He took the formative trip to the Southwest in 1873, visiting Colorado and New Mexico. During this period, Young also traveled to Europe numerous times and studied at the Acadamie Julian in Paris. In 1878, he exhibited at the Paris Salon. He also received recognition from the National Academy of Design in New York and the Pennsylvania Academy of Fine Arts.

Although Young had many different interests in his life, painting was the most meaningful to him. After years of experimentation, Young perfected his technique of combining watercolor with oil paint and finishing with a varnish of his own invention. In the early part of the new century, a reviewer remarked, “Never does the artist’s work grow fanciful at the expense of truth for, although he was an idealist and his method was impressionist, first of all he was an unswerving realist.” Young’s work now belongs to the collections of the Oakland Museum, the Denver Art Museum, and several others. 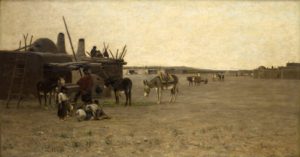 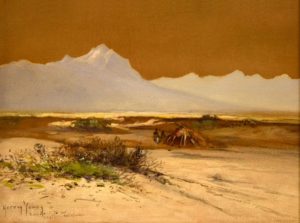