Born in New York City in 1881, Harold Harrington Betts and his three siblings (Grace, Louis and Edwin, Jr.) were all artists, whose first instruction came from their father, Edwin Daniel Betts, Sr., known as a portraits and landscape painter. For most of his life, Harold Betts lived in Chicago, and his work was exhibited at the Art Institute of Chicago and the Pennsylvania Academy of Fine Art.

In the early 1900s, Betts ventured west as did many artists of the era, ultimately becoming known for his paintings of the Grand Canyon and the surrounding Arizona landscape. Listed among the artists who visited the Hubbell Trading Post in Ganado, AZ, Betts’s work has been displayed at the historic National Historic Site. Betts’ oeuvre included a portrait of John Lorenzo Hubbell, as well as paintings of the Pueblo natives of the Southwest, including Hopi, Navajo, and Pueblo people who lived along the Rio Grande in New Mexico. He was also drawn to the panoramas of both Colorado and southern California, creating landscapes of the American West. Many of his paintings are part of the Santa Fe Railway Collection. 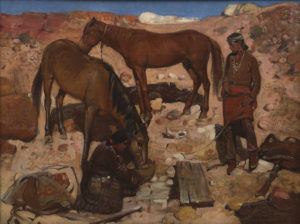 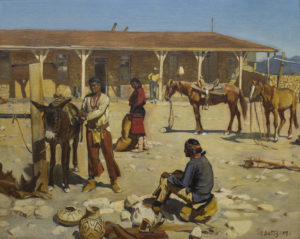