A native of Hamburg, Germany, Hans Paap studied at Munich’s Royal Academy of Fine Arts. Responding to the pull of the New World that drew many European artists westward, he moved to Veracruz, Mexico and traveled around South America to hone his skills and make his mark as a working artist. An astute traveler, Paap made his way to Taos, New Mexico, in 1929 where the Taos Society of Artists had established an international reputation for its members, many of whom were also European émigrés. While there, Paap created the work for which he is best-known, iconic portraits and landscapes of New Mexico and its Native residents, captured in bold, colorful compositions.

Paap continued to travel, although an ill-timed return to Germany kept the artist there after the borders closed at the start of WWII. When the war ended, he returned to America, and lacking immigration documents, spent two years confined at Ellis Island. He was eventually able to re-enter the U.S. after fellow Taos artist E. Martin Hennings signed an affidavit on Paap’s behalf.

Although Paap returned to Taos in later travels, he continued to roam the globe, painting in locations that inspired him, and his life ultimately came full circle with his 1967 death in Hamburg. 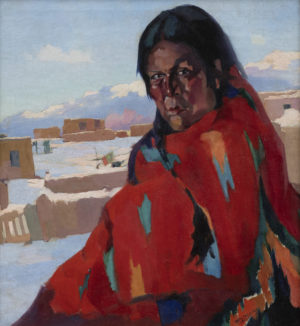