Gilbert Gaul was educated at Claverack Military Academy. He was a pupil of L.E. Wilmarth at the National Academy of Design (1872-1876) and studied privately under J.G. Brown. His early subjects emulated his teacher’s popular and sentimental genre works. However, Gaul was commissioned by Century magazine to illustrate the historical “Battles and Leaders of the Civil War,” published in 1887, and he soon became known as a foremost American painter of battle scenes. 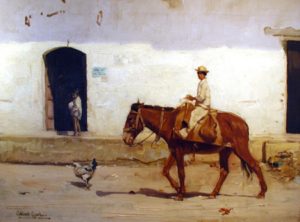