Gerard Curtis Delano was born in Marion, Massachusetts. He began studying art in New Bedford, Massachusetts, and later became the pupil of George Bridgman at the Art Students League in New York and of Dean Cornwell, Harvey Dunn, and N.C. Wyeth at the Grand Central School of Art. Following his education, he became a successful commercial artist and illustrator working, mostly in New York City, until World War I.

Delano first visited the West in 1919, working as a ranch hand in Colorado. Around the age of thirty, he homesteaded at Cataract Creek in Colorado, building his own dirt-roof studio. He devoted much of his time to painting and commuted to New York for commercial art assignments. In 1933, during the Great Depression, he sold everything and moved west permanently. In 1936, he sold a series of illustrated articles on the development of the West to Western Story Magazine. After 1940, Delano was finally able to spend all of his time painting. In 1943, he visited the Navajo Reservation: “Arizona’s picturesque settings provide to my mind the greatest possible opportunity for pictorial beauty. The people are themselves naturally artistic. I feel great sympathy for them. They have survived a life of hardship, yet have done so with heads held proudly high.” His feelings for the Navajo and their culture were so strong that he painted them almost exclusively for the remainder of his days. His art is exceptional for the superior sense of design, color, and simplicity of composition. 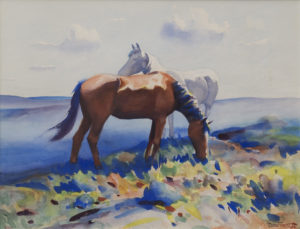 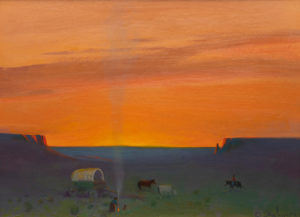 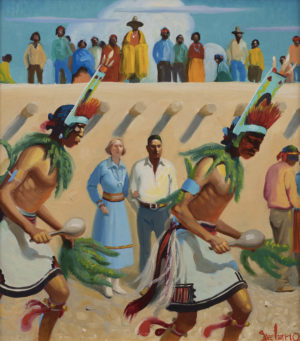 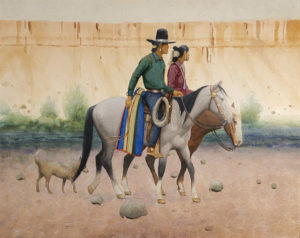 Riders in the Canyon