As a young artist, Georgia O’Keeffe began working in 1909 as an illustrator for advertising companies. She then became a supervisor of art in the Amarillo, Texas, public school system from 1912 to 1914. Around that time, from 1913 to 1916, O’Keeffe was also an instructor of art at the University of Virginia, and for two years after that, head of the art department at the West Texas State Normal College.

During that time, O’Keeffe had become the student of Arthur Wesley Dow, who led her to forms derived from nature and to subtle color contrasts. It was her future husband and art dealer, Alfred Stieglitz, who first presented her work in a 1916 exhibition. When he first saw the sketches drawn by the young art teacher in 1916, he famously said, “Finally, a woman on paper.” Accordingly, he popularized an understanding of O’Keefe’s works as embodying a feminine principle, and she herself became the symbol of the new, uninhibited woman. In 1919, when O’Keeffe visited Taos, New Mexico, her art became more mystical and visionary, flavored with symbolism. She returned to New Mexico each summer, moving there permanently in 1946.

We buy works by Georgia O’Keeffe 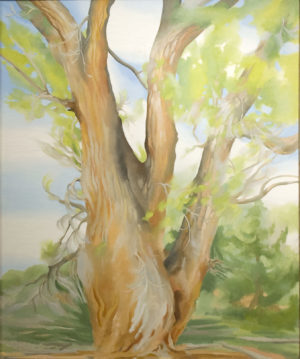