American figure and portrait painter George de Forest Brush was born in Tennessee. Following his art studies in Paris under Jean-Leon Gerome, he taught in New York City at the Cooper Union and the Art Students League. Brush was also an illustrator who received numerous commissions from magazines, most notably “Harper’s Weekly” and “Century,” including a noteworthy illustrated article “An Artist Among the Indians” in 1885.

Brush became well known for his depictions of Native American scenes of the West. Several of his works are now in major museums, including the National Gallery in Washington, D.C. Among his awards are gold medals won at the expositions of Chicago in 1893, Paris in 1900, Buffalo in 1901, and St. Louis in 1904. He was elected to the National Academy of Design, the Society of American Artists, and the American Academy of Arts and Letters. Brush died in Hanover, New Hampshire, in 1941. 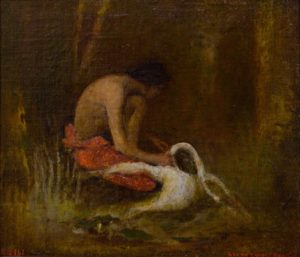