Fritz Scholder was born in 1937 in Breckenridge Minnesota. He studied art at the University of Kansas, Wisconsin State University, and Sacramento College, in California. Of German and Native American decent, in 1960 Scholder was awarded a Rockefeller Foundation full scholarship for the Southwestern Indian Art Project at the University of Arizona. After receiving his Master of Fine Arts, he moved to Santa Fe to teach history and painting at the recently opened Institute of American Indian Arts. Though Scholder left IAIA after five years he stayed on in Santa Fe, working out of a home and studio on Canyon Road.

In 1970, Scholder was invited by the Tamarind Institute to do a series of lithographs, entitled “Indians Forever.” That same year, he had his first one-man show at the Lee Nordness Galleries. Scholder began receiving invitations to be a guest lecturer at prestigious institutions around the country, including Princeton and Dartmouth College. A major event in his career occurred in 1972, when the Smithsonian Institution held a highly publicized two-person exhibition of his work along with his former student, T.C. Cannon.

Throughout his career, Scholder was an active, thought-provoking teacher who influenced innumerable contemporary Native American artists. The recipient of many awards and honors, he spent the latter part of his career living and working in Scottsdale, Arizona. 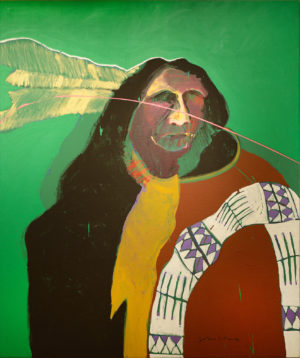