In 1921, Frank Applegate left his job as the head of the sculpture and ceramics department at New Jersey’s Trenton School of Industrial Arts and moved to Santa Fe. Applegate soon turned to painting, fascinated by traditional Pueblo and Hispanic cultures and the varied Southwestern landscape. In the 1920s, he joined the New Mexico Painters, a group that brought together progressive-thinking artists from both Santa Fe and Taos.  Applegate was active within the Santa Fe community in a variety of endeavors, including adobe architecture and theatre production. He also became known as an expert on works from the early Spanish Colonial period in New Mexico. He was an energetic and effective force in the movement to encourage and assist Native American and Hispanic craftspeople, and was one of the founding members of Santa Fe’s Indian Arts Fund and was involved in the creation of the Spanish Colonial Arts Society.

Applegate continued to exhibit widely, including a solo show of watercolors in 1927 at the Denver Art Museum (which also traveled to other museums), a watercolor exhibition at the Art Institute of Chicago, and his oil paintings at the Corcoran Gallery of Art, in Washington, D.C., and California Palace of the Legion of Honor in San Francisco. Evening in the Pueblo 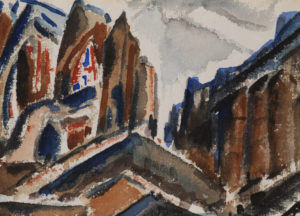