Born in Massachusetts, painter and photographer Francis Seth Frost was a founding member of the Boston Art Club and also maintained an artists’ supply company in collaboration with his friend, E.H. Adams. Frost traveled widely in the United States, visiting scenic locations throughout New England, the Hudson River Valley and the American West. In 1859, in the company of fellow artists Albert Bierstadt and Henry Hitchings, Frost was a member of the Lander Expedition, led by explorer Frederick Lander, who created a popular route used by wagon trains heading westward from Wyoming to Oregon. Well-regarded in his day, Frost is known to have created an extensive collection of artwork, most of which has unfortunately been lost. Today, a mere seven paintings are documented as being in the Smithsonian Museum’s collection of American paintings. 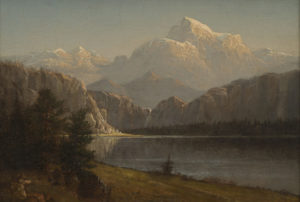