Florencio Molina Campos was born in Buenos Aires on August 21, 1891. His primary subject matter was the traditional gaucho culture of the Pampas – the cowboy and cattle country of Argentina. Often humorous and frequently poignant, Campos’s iconic images were first exhibited in 1926 to great critical and popular acclaim. In 1930, Campos contracted with the firm Fabrica Argentina de Alpargatas to produce paintings for their annual calendars. The relationship with Alpargatas extended through 1945, making the artist a household name throughout his native country.

Campos made his initial visit to the United States in 1937. Favorable coverage of Campos appeared in “Life,” “Esquire,” “Time,” and other important publications, introducing his work to U.S. audiences. He enjoyed great success in this country and was collected by such notables as Dwight D. Eisenhower, Nelson Rockefeller, Will Rogers, Yehudi Menuhin, and Walt Disney. 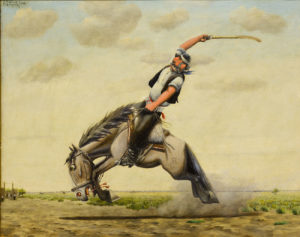 Come on Old Boy! Lets get it over with. We’ll be friends alright, someday. Nevermind the Whip.