Francis Luis Mora was the son of the Spanish sculptor, Domingo Mora. He studied under his father before attending the Boston Museum of Fine Arts School and the Art Students League. Mora worked in oil, watercolor, charcoal, and pastel. He usually depicted leisurely life in his work: figures, interiors, and landscapes. Mora was an illustrator and muralist whose work reflected a blend of Spanish and Modern American influence. By the age of 18, Mora was illustrating leading periodicals. Two years later he began exhibiting his work, and in 1900 he was commissioned to paint a mural for the public library in Lynn, Massachusetts. Mora also created a mural of the Michigan State Building for the St. Louis Exposition. He painted a portrait of President Warren Harding, which still hangs in the White House. Mora had a very successful career as both an artist and teacher. He taught classes at the Art Students League, the Grand Central School of Art, and the New York School of Art. Mora died in 1940. 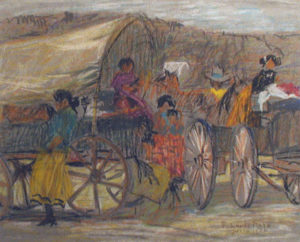