Before arriving in Santa Fe, sculptor Eugenie Shonnard was already becoming an internationally recognized artist, with shows at the Pennsylvania Academy of Fine Arts and a solo exhibition in Paris. She was trained in New York at the School of Applied Design for Women and the Art Students League, and studied in Paris with Auguste Rodin and Emile Bourdelle.

Shonnard settled in Santa Fe in 1927. She had met the director of the Museum of Fine Arts, Edgar L. Hewett, and was given studio space there. Shonnard was captivated by the native Pueblo population of New Mexico. She said of this period, “I just went off with the Indians. My mother used to go with me. They used to take me across the Rio Grande in their truck. I got to know them very well.”

During her career, she developed her own sculpting material, similar to sandstone, which she utilized for her later works. Over the course of her career, Shonnard exhibited widely, including at the Museum of Modern Art in New York, the Salons of America, the 1939 World’s Fair in New York, the Art Institute of Chicago, and museums throughout New Mexico. Her works are in private and public collections in the United States and France. 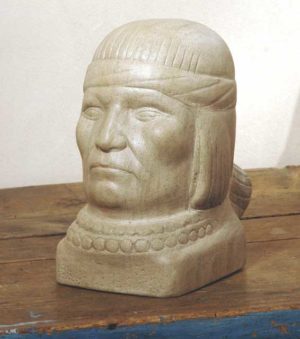