Born in Cabezon, New Mexico, now a ghost town perched in the shadow of Cabezon Peak, Romero de Romero moved south to Albuquerque in 1904, where he opened a successful advertising business specializing in sign painting and billboards.

In the 1920s, he turned his talents to fine art and began working in a social realism style, painting landscapes and portraits. He is known for his depiction of the traditions of New Mexico’s Penitentes, a religious brotherhood that worshipped in buildings called moradas.

In the 1930s, Romero de Romero worked under the auspices of the WPA/New Deal, painting a series of murals for the old Bernalillo County Courthouse, in Albuquerque. In 1936, he left New Mexico and began extensive travels throughout Latin American where he continued to paint the portraits and landscapes that were his lifelong subject matter.

The artist’s work is prized by collectors for its honest depictions of mid-century life in New Mexico. 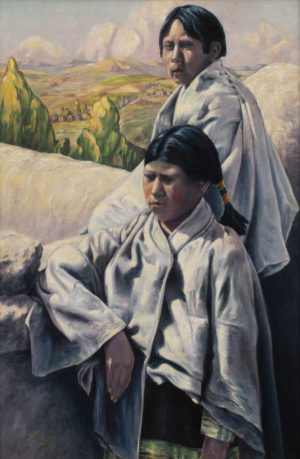