Ernest Blumenschein, a founding member of the Taos Society of Artists in 1915, was one of the most celebrated of this early artist community. Notably, he was also one of the earliest advocates for Taos, declaring it an ideal home for an art colony. In September of 1898, on a painting excursion with Bert Geer Phillips, as the two were traveling by wagon, a wheel broke several miles outside of Taos. Hoping for wheel repair, when they arrived in the town, they found much more. Taos had beguiled them, convincing them that their quest for inspiring subject matter needed no further search.

Raised in Dayton, Ohio, Blumenschein began his art training in Cincinnati, then moved to New York to study under William Merritt Chase at the Art Students League. Later, he enrolled at the Academie Julian in Paris, where his fellow students were Joseph Henry Sharp, Bert G. Phillips, and Eanger Irving Couse, all of whom would reconvene in Taos. Blumenschein settled permanently in Taos in 1919, in a home that is now the Blumenschein Home & Museum. Throughout his career, Blumenschein’s work received numerous prizes and was exhibited frequently in museum and gallery shows. Today his paintings are held in the collections of major art museums, including those of Dallas, Phoenix, Denver, and the Smithsonian. 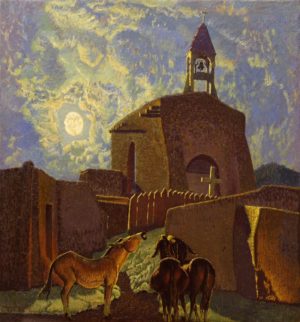 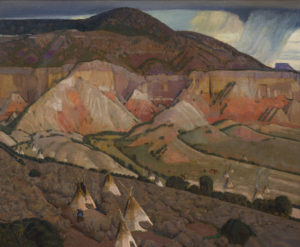