A writer, meteorologist, and Taos landscape painter, Eric Sloane studied at the Art Students League and at the Yale School of Fine and Applied Art, in 1935. He lectured on cloud forms and weather beginning in 1940, and wrote books on the same subject starting in 1941. He began another series of books on Americana, illustrated with his own sketches, in 1954.

Born Everard Jean Hinrichs in New York City, Sloane learned the trade of sign painting as a young boy. In 1925, he ran away from home in a Model T Ford, earning his way westward as an itinerant sign painter. He made his way to Taos, where he guided tourists, painted signs, and learned Indian dances. He also met and befriended Leon Gaspard, the great Russian painter.

When he returned East, he attended classes at the Art Students League. In honor of his favorite teacher there, John Sloan, the young artist adopted the name Eric Sloane. He studied meteorology at MIT, worked briefly as the nation’s first television weather man, and wrote several books on weather. He also began to paint farms, old farm tools, rustic landscapes, covered bridges, and barns, which became his hallmarks. In 1960, Sloane returned to Taos and, for many years, divided his time between work in New Mexico and the East coast.

We buy works by Eric Sloane 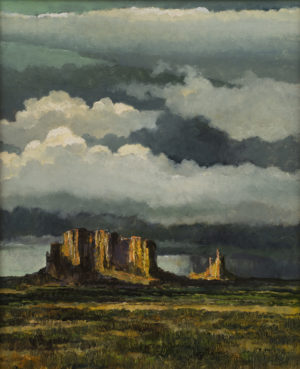 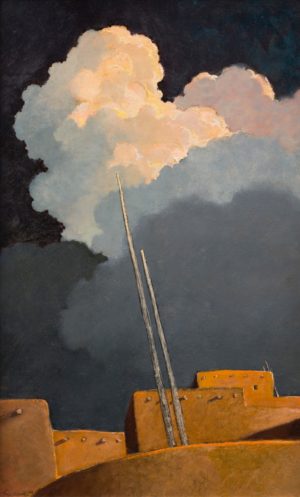 A Reverence for Sky