Although he is best known for his idyllic scenes of women and children relaxing on the beach, Edward Henry Potthast was born in Cincinnati, Ohio, in 1857. After working as a commercial lithographer, Potthast pursued his artistic dreams and left to study in Antwerp, Munich, Paris, and Barbizon, in France, between the years 1882 and 1887. During this time his art was dark and muted, archetypal of the Munich style of art. While in Paris, Potthast enrolled in the Académie Julian and held exhibitions in several salons between 1889 and 1891.

His defining work however was produced when he returned to New York in 1915 and painted his beach scenes. His favorite places to paint included Central Park and Coney Island. He used thick applications of paint, cropped compositions, and warm, cheery colors. A prominent technique Potthast used was rendering figures as blocks of color with vague detail, to the extent of abandoning facial expressions.

A few of Potthast’s artistic achievements include exhibitions at the National Academy and the Pennsylvania Academy of the Fine Arts, and a commission by the Santa Fe Railroad to paint the Grand Canyon. During his career he belonged to professional associations such as the New York Watercolor Society and the National Academy. 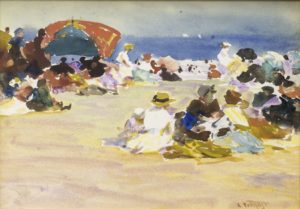 Sunday at the Beach 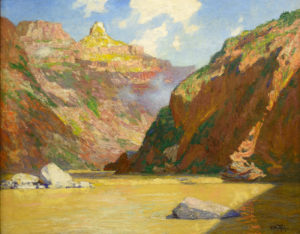 Down in the Grand Canyon