Edward Borein was born and raised in San Leandro, California, and from an early age showed strong artistic talent and a passion for the life of the cowboy. He worked for several years in that vocation, sketching constantly while on the job and absorbing every story he heard of life on the old range.

In 1897, Borein made his first trip to Mexico. He rode in Baja, California on horseback, sketching his way southward and observing life on the Mexican frontier. Crossing over to the mainland, he traveled through much of the country, working as a vaquero in order to earn his way. After two years, he made his way back to Oakland by riding through New Mexico and Arizona, where he came in contact with the southwestern Native American tribes. After returning to California, Borein set up a studio and began to paint in oils.

Borein went to New York in 1907 to work as an illustrator. It was there that he met Charles Russell on one of the latter’s visits to the city, and he also began a long friendship with Will Rogers. Over the next few years, Borein established himself as a first-rate and highly sought-after artist of life in the Old West. 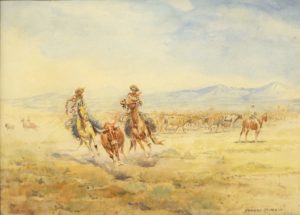 Turning Back the Bolter