Born in Florida in 1922, Clark Huling began his studies in art at age twelve with lessons from Sigismund Ivanowski, who had served as Court Painter to Tsar Nicholas II, in Russia. After graduating with a degree in physics from Haverford College in 1944, Hulings was recruited for the Manhattan Project in Los Alamos, New Mexico. Poor health, however, prevented him from entering the Project, and he remained in Santa Fe to recover. He began supporting himself as a portrait painter and had his first one-man show at the New Mexico Museum of Fine Arts in 1945.

After moving back East, Hulings continued painting portraits and landscapes, and his interest in design and illustration led him to three years of studies at The Art Students League in New York City. While he maintained a home in Santa Fe, Hulings traveled and exhibited his work extensively, with shows at numerous galleries, as well as the Hudson Valley Art Association, the National Cowboy and Western Heritage Museum, and the Cowboy Hall of Fame. The latter awarded him the Trustees Gold Medal for his “distinguished contribution to American art.” 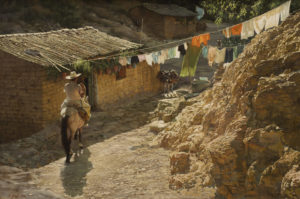