Born in Franklin, Massachusetts, Charles Partridge Adams moved with his mother and two sisters to Denver, Colorado, in 1876. They did so in an effort to cure the two girls, who suffered from tuberculosis. Adams remained in Denver and, after a short stint as an art teacher, he studied wood engraving with Major J. M. Bagley. He quickly abandoned engraving for health reasons and began working in crayon. His business card read “Landscapes and Crayon Portraits‚” although he much preferred landscapes.

The artist soon made a name for himself in Denver. He established a wealthy clientele who purchased a number of his paintings to decorate their homes and to give as Christmas gifts. In 1890, he exhibited for the first time at the National Academy of Design. Three years later, Adams opened his first studio on Larimer Street in Denver and soon became a charter member of the Denver Artists Club. He began working in watercolor and had success in the new medium, selling his paintings in Denver as well as Colorado Springs, Pueblo, Colorado, Kansas City, and Chicago. Though Charles Partridge Adams is best known for his Colorado landscapes, he also painted in Yellowstone, the Tetons, the Canadian Rockies, the New Mexico desert, and California. 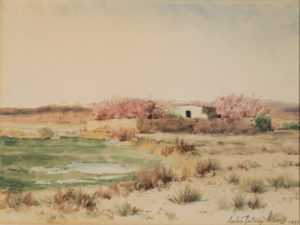 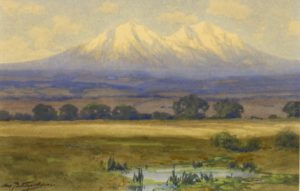