In 1881, Charles Craig was the first major Western artist to paint Taos. He went on to become an important Indian genre painter, Western landscapist and illustrator. Largely self taught as an artist, he made his first Western trip up the Missouri River in 1865, spending four years with various tribes of Indians and traveling as far as Fort Benton, Montana. He then opened his studio in Zanesville, Ohio, to earn his tuition for art training by painting portraits. He was a student at Pennsylvania Academy of Fine Arts from 1872 – 1873 and studied with Peter Moran. On his way to Colorado Springs in 1881, he stopped to paint images of the Old Indian town of Taos. In 1883, he came back to sketch in Taos and Santa Fe. Craig eventually settled in Colorado Springs where he made his home for 50 years. 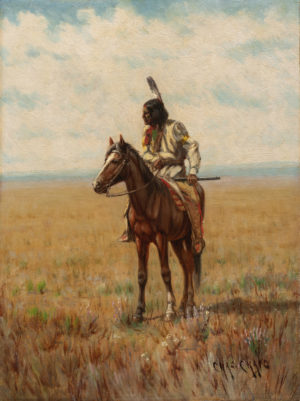