Renowned for his unusual, atmospheric watercolors, Charles Burchfield was born in Ohio in 1893. He attended the Cleveland Institute of Art, where he studied under Henry Keller, leader of a generation of watercolor artists known as the Cleveland School. In 1921, Burchfield moved to Buffalo, New York, for employment as a designer for a prominent wallpaper company. Drawn to the realist style prevalent in that era of American art, he painted numerous scenes of Buffalo’s streets, harbor, rail yards, and the surrounding countryside.

In 1929, New York’s Frank W. K. Rehn Galleries began to represent Burchfield, allowing him to resign from his design job and to begin painting full-time. In 1930, he was the subject of a one-man show at the Museum of Modern Art, and his work was also featured in the Carnegie Institute’s 1935 International Exhibition.

In the 1940s, Burchfield’s work took a decidedly transcendental turn, in watercolors that probed what he thought of as the mysteries of nature and spirit. He once explained that, “An artist must paint not what he sees in nature, but what is there. To do so he must invent symbols, which, if properly used, make his work seem even more real than what is in front of him.” Throughout his career, he advocated for the virtues of watercolor, resisting the popular notion of them as fragile and impermanent. Burchfield’s work was widely exhibited and became part of many prestigious museum collections. 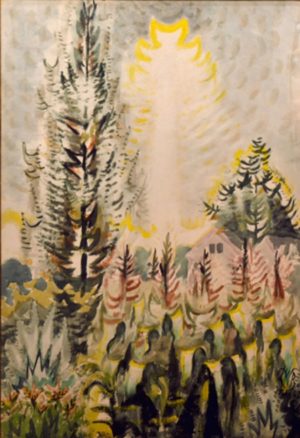