A California native of Portuguese descent, Carlos Vierra studied and worked as a cartoonist in New York before lung disease forced him to move to Santa Fe, in 1904. He became Santa Fe’s first resident artist, and thus founded what is known as the Santa Fe Arts Colony. Vierra opened a photography and painting studio on the Plaza and committed himself to recording local architecture before it disappeared.

In 1914, Santa Fe businessman Frank Springer commissioned him to paint all the mission churches at each pueblo. Consequently, Vierra can be credited with preserving in his paintings both Puebloan architecture and the “Santa Fe Style.” In this he worked with Springer, architect John Gaw Meem, and Edgar L. Hewitt, Director of the Museum of New Mexico. Vierra also painted murals for the Museum of Fine Arts at Santa Fe (using himself as the model for Christopher Columbus) and for the Panama-American International Exposition at San Diego in 1915.

We buy works by Carlos Vierra 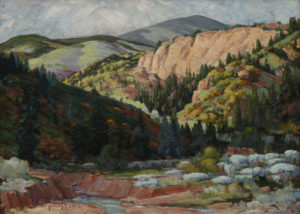 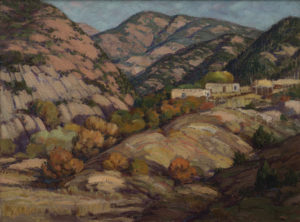