Carl Wuermer was born in 1900 in Munich, Germany, and in 1915, he immigrated to the United States where he settled in Chicago. From 1920-1924, he studied at the Art Institute of Chicago, which was followed by a move to New York City to continue his studies at the Art Students League.

Wuermer painted primarily in oils, and his technique of building up the paint surface with dots of color was similar to pointillism. The results, however, were more detailed and realistic, and his subject matter included landscape paintings that depicted vast panoramic vistas. His work was widely exhibited and among other awards, he received an Honorable Mention from the Art Institute of Chicago for his 1926 painting, “Summer in the Catskills.” In 1928, he was awarded the J. Francis Murphy Memorial Prize from the National Academy of Design.

Wuermer eventually settled in Woodstock, where the rural surroundings of upstate New York provided him with lifelong inspiration; he spent the rest of his career there until his passing in 1983. 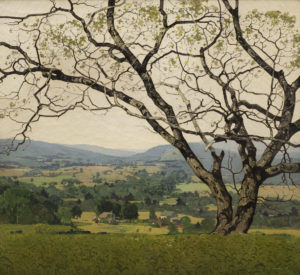 View of the Valley