Carl Woolsey, the younger brother of painter Wood Woolsey, was largely self-taught. During 1922, when he and his family moved from Indianapolis to Long Beach, California, he studied with artist Henry Richter.

Woolsey became interested in New Mexico after seeing an exhibition of paintings by Walter Ufer, a founding member of the Taos Society of Artists. The artist invited Woolsey to New Mexico where he worked on refining his abilities with Ufer’s guidance. This proved seminal to Woolsey’s rapid success, after which his work was juried into exhibitions of the Hoosier Salon and the National Academy of Design (he participated in successive exhibitions at both institutions.)

Woolsey’s burgeoning career led his brother Jean to join him in Taos, where the two rented a studio and Jean opened a frame shop. Woolsey’s older brother Wood, a commercial artist, along with the rest of the Woolsey family, soon joined Carl and Jean in Taos. With their father as business manager, the careers of both Carl and Wood Woolsey achieved commercial success. Carl’s work was exhibited at the Milwaukee Art Institute, the Corcoran Gallery in Washington, DC, and at both the Akron and Dayton Art Museums, in Ohio. 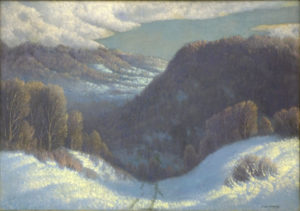