Carl Von Hassler was born in Bremen, Germany, of French and Dutch parents. He came to the United States in 1909, to live and study art in Greenwich Village for one year. After a short return to Germany, Von Hassler decided to immigrate to the United States. In 1920, he moved to New Mexico. He lived in Manuelitos, on the New Mexico-Arizona border, where he sketched and painted portraits of Native Americans. His interest in their culture was so strong that he explored all of the pueblos in the area and learned to speak Navajo. Von Hassler eventually settled in Albuquerque, where he painted the local landscape. He used all media in his work, including ink, watercolor, egg tempera, and oil. His preference was for plein air work, which stemmed from his great respect for nature. Typically, he would sketch on location and complete the painting in his studio. 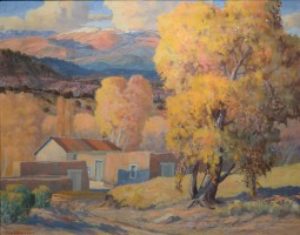