Born in Grinstad, Sweden, Carl Oscar Borg moved to London at age 20 to assist portrait and marine artist George Johansen. In 1904, he arrived in San Francisco, having jumped ship as a seaman on the U.S. Arizonan. He walked the rail track to Los Angeles where he learned painting techniques from William Wendt, a well-known landscape artist. Sponsored by Phoebe Hearst, mother of newspaper tycoon William Randolph Hearst, Borg studied art in Paris and Rome. After his return home he spent his time in California and Arizona working on commissions of Southwest Native American tribal ceremonies and Grand Canyon landscapes for Mrs. Hearst. After spending World War II in Sweden, he returned to Santa Barbara and died there in 1947. 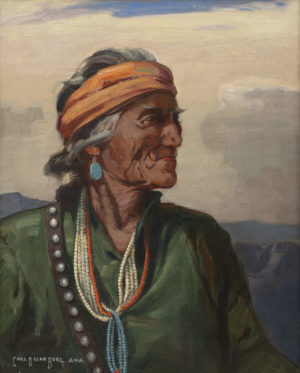 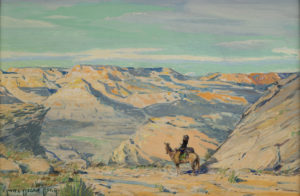