Henry Cady Wells was born to a prominent family in Southbridge, Massachusetts, in 1904. In his youth, he was fortunate enough to enjoy a classical education, with studies in music, literature, and the arts. After dropping out of a number of schools, in 1922 his farther sent him to Evans Ranch School in Arizona. Wells fell in love with the Southwest and began painting desert and mountain landscapes.

In 1932, on an invitation to Santa Fe from artist Elizabeth Boyd and her husband, Eugene Van Cleave, Wells began portraying the southwest landscapes in watercolors. He studied the landforms by walking through the landscape and observing the surrounding terrain, collecting driftwood and river rocks.

Wells soon became recognized as a serious painter and was strongly influenced by the work of Taos artist Andrew Dasburg and modernists such as John Marin and Georgia O’Keeffe.  Watercolor was a favorite medium, and his abstracted shapes and intersecting colors reflected his intense individuality and personal vision. While living in Taos, Wells also restored a home north of Santa Fe, making many friends in both cities and becoming a fixture in Taos and Santa Fe society. He served on the Board of Directors of Santa Fe’s School for Advanced Research and helped found Albuquerque’s Jonson Gallery.

Wells’ work has been widely exhibited and today is in the permanent collections of institutions such as the Fogg Museum of Art and the Wadsworth Atheneum, in Hartford, Connecticut. 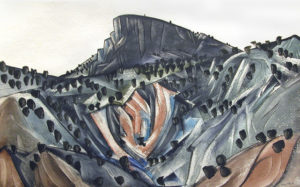