B.J.O. (Bror Julius Olsson) Nordfeldt was born in Sweden and immigrated to the United States in 1891, at the age of thirteen. His family settled in Chicago where Nordfeldt began working as a typesetter in the offices of a Swedish-language newspaper. His employers recognized his natural artistic ability and, with their encouragement, he began studying at the Art Institute of Chicago, in 1899. The financial backing of a patron allowed Nordfeldt to travel to Paris at the turn of the century, where he spent a few weeks studying at the Academie Julien. Both schools figure prominently in the early careers of numerous important New Mexico artists, including several members of the Taos Society of Artists.

Nordfeldt remained in Europe until 1903 and learned the techniques of Japanese woodblock printing during an extended stay in England. After returning to the U.S., he lived in Chicago, Massachusetts, and New York City, steadily developing a reputation for himself as a printmaker, painter, and illustrator. While working in Provincetown, Massachusetts, Nordfeldt developed a method for making multi-color prints with a single woodblock. This technique, known as white-line woodblock printing, was adopted by other artists and is now closely associated with the Provincetown art colony.

At the suggestion of William Penhallow Henderson (a classmate from his days at the Art Institute of Chicago), Nordfeldt visited Santa Fe after the end of World War I. He felt an immediate affinity for the people and landscapes of New Mexico and he was to live in the state off and on for the next twenty years. His New Mexico paintings, particularly his vibrant depictions of Pueblo ceremonial scenes, are distinctly modernist in composition and execution. The influence of Paul Cezanne is readily apparent in Nordfeldt’s work, along with that of other pioneering New Mexico modernists, including Marsden Hartley, Andrew Dasburg, Ward Lockwood, and Jan Matulka. 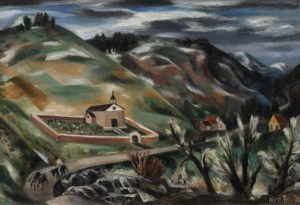