Born in Leavenworth, Kansas, Blanche Chloe Grant created landscape and figure work associated with the American Southwest. A graduate of Vassar College, she studied art at the Boston Museum School of Fine Arts, the Pennsylvania Academy, and at The Art Students League in New York. She became a part of Howard Pyle’s circle of illustrators in Wilmington Vermont, and, by 1914, was an established magazine illustrator and landscape painter. In 1920, she moved to Taos, New Mexico, and became an author and editor of books on Taos and various southwestern topics, including Kit Carson. She also did numerous oil paintings of Native Americans, emphasizing the romantic and colorful side of life in Taos. 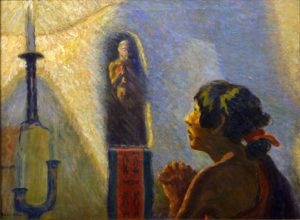