Bert Geer Phillips was born in New York in 1868, and in his childhood, was deeply influenced by tales of the American West featuring figures such as Kit Carson and the hero of author James Fenimore Cooper’s Leatherstocking Tales, Natty Bumpo. He attended both the Art Students League and the National Academy of Design before traveling to Europe where he studied at the Academie Julian, in Paris. While in Europe, Phillips became acquainted with Ernest L. Blumenschein and Joseph Henry Sharp, forming friendships that proved to be seminal to New Mexico’s reputation as an arts destination.

in 1898, at the age of 30, Phillips settled in Taos, New Mexico, where he conceived the idea of starting an art colony there. This notion became a reality when fellow artists Blumenschein and Sharp, along with E. Irving Couse, Oscar Berninghaus, and W. Herbert Dunton, joined him in his adopted home. Together, they created the nucleus of the Taos Society of Artists.

Phillips became known for depicting the people of Taos, particularly his Pueblo and Spanish neighbors and friends. He was instrumental in the establishment of the Taos National Forest and later became its first forest ranger.

Today, the artist’s work is held in many renowned collections, including those of the Philbrook Museum of Art and the Gilcrease Museum. 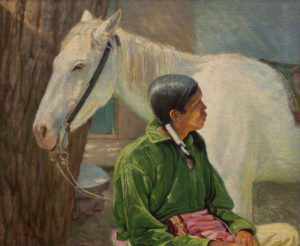 A Taos Indian and His Pony 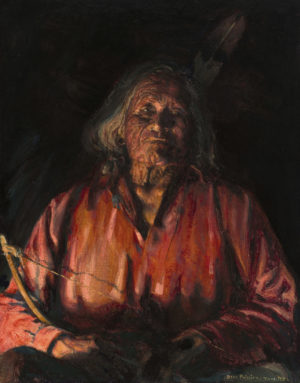