Ben Turner is known for his paintings of cottonwoods, mountain scenes, and floral arrangements that use thickly applied paint. Turner never drew preliminary sketches. Instead, he painted directly from the subject to ensure a feeling of spontaneity.
Turner was born in 1912 in Gallup, New Mexico. As a descendant of William Turner, it was no surprise that at a young age he developed a passion for art. He studied at the University of New Mexico, the Chicago Art Institute, and later under artists such as Ernest Blumenschein and Joseph Henry Sharp. While in school, Turner produced a daily comic strip called “Jerry ‘n’ Jake” that was distributed to numerous Southwestern newspapers.
During the Second World War, Turner worked as a staff artist, painting battle scenes in Italy and Romania that were published in the magazines “Look” and “Life.” Turner exhibited at the Library of Congress in Washington D.C. and the Museum of Fine Art in Santa Fe. 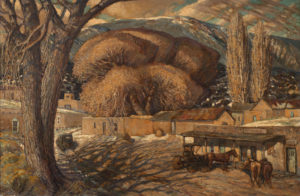 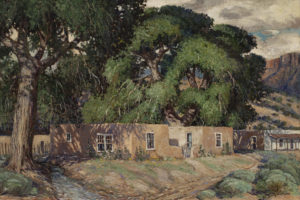