After graduating from the Pratt Institute in 1919, Barbara Latham worked in New York as an illustrator for magazines and greeting cards. A trip to Taos in 1925 led her to move there the next year. Soon she met printmaker Howard Cook and the two were married in 1927. Over the next decade the pair traveled extensively, much of which inspired the material for their artwork. Ultimately, they settled in Taos. During her career, Latham worked in a variety of media, including etchings, wood engravings, lithographs, and paintings in egg tempera, watercolor, and oil. In addition, Latham was well regarded for her work as an illustrator of more than seventeen children’s books. In 1934, her watercolor and oil paintings were presented in a solo show at New York’s Weyhe Gallery, and today her work is held in major art museum collections, including at the Metropolitan, Whitney, Philadelphia, and New Mexico Museum of Art. 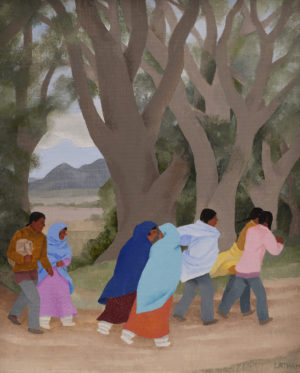 Back to the Pueblo 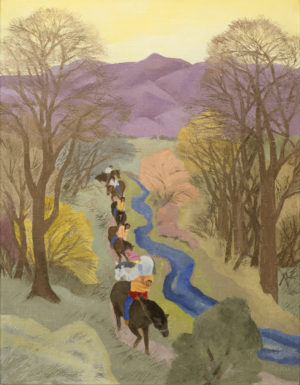 The Trail to Blue Lake